The bad news is that the status quo continues in Syracuse.

The good news is that 35% is by far the best citywide vote Greens have yet received in the city. The previous best was the 12% I received last year citywide in the governor's race.

The other Green citywide candidates for Councilor-At-Large and Commissioner of Education received votes from between 24% and 29% of the voters in those multi-seat races. See the full results here.

These are results we can build upon.

Thanks to everyone who contributed to our campaign.

We will be back.

Howie Hawkins, a Green Party member, will provide checks and balances on city government where Democrats now hold every elected office. Hawkins will have the independence to perform audits that may be unwelcome by some, but can help the Mayor, Common Council, and city departments and agencies do their jobs better and will inform the citizens of Syracuse.

From a lifetime working on construction sites and loading docks, Howie Hawkins knows you have to work hard to keep your job. The current city auditor, Marty Masterpole, is not doing the job. Howie Hawkins will.

Hawkins will meet the auditing requirements of the city charter and budget. The city budget expects 8 financial audits and 3 special audits per year. Masterpole has produced only 4 audits a year since taking office in 2012, far fewer than his 2004-2011 predecessor (see the published audits).

The city charter expects monthly audits of the Department of Finance; annual audits of all city departments, the school district, and the housing authority; and an external audit of the auditing department every other year. None of these charter requirements are being met. Hawkins will work hard to meet the expectations of the city charter and budget.

The city charter requires the hiring of a Deputy City Auditor who is a professional – a Certified Public Accountant or a professional with at least three years experience in municipal auditing. Masterpole hired a crony for Deputy Auditor who is not qualified. He pushed out an 11-year supervisory civil service auditor by eliminating her $56,000 position and then offering to hire her back as an entry level auditor at $43,000. His budget provides for a staff of four, but he has hired only three. I will hire a qualified Deputy City Auditor and quality civil service staff so that the City Auditor's Office has the capacity to do audits that meet current U.S. Government Auditing Standards.

Howie Hawkins will bring best practices from other public auditors to Syracuse:

An important component of the City Auditor's job is to identify risks and recommend actions to reduce risks. Howie Hawkins will prioritize special audits that will have the most impact on the future of Syracuse, such as:

Howie Hawkins will institute an open door policy to encourage communications from and to the people of Syracuse. Residents will be encouraged to write, phone or stop by the office whenever they want to ask questions or make recommendations.

Hawkins will hold neighborhood meetings to report on the work of the City Auditor's Office and listen to residents' concerns.

He will also convene an advisory committee of auditing, accounting, financial, legal, and policy experts to help the City Auditor's Office do the best job possible. 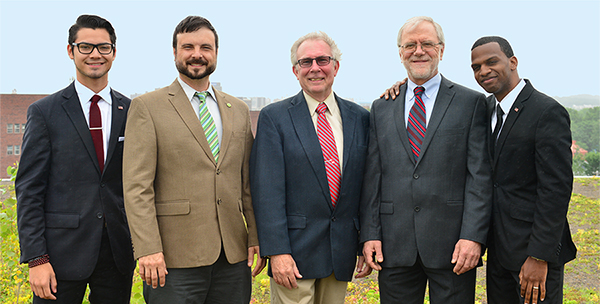